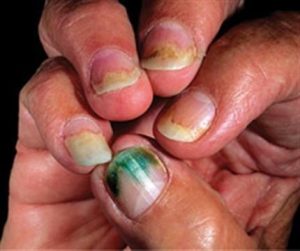 One of the easiest cases I have ever treated was a man whose feet had turned green. It happened like this. My patient was an old man with a number of disabilities that made him wholly dependent on care. His carers were delightful ladies, but not great diagnosticians. They called me in a state of great concern, telling me that their patient’s feet had suddenly turned green, and would I please pay an urgent visit, as they were convinced he had succumbed to galloping gangrene.

I assured them that gangrene isn’t green, (actually, it’s black) but hurried over to find out what could possibly have produced this startling effect. I examined the feet in question, and they were indeed coloured a striking green. They were also a little, shall we say, unkempt, but apart from the colour there was clearly not a great deal wrong with them. A few enquiries revealed that my patient was in the habit of wearing Ugg boots, and a little light went on in my head. I asked if he wore socks under his boots – he did not.

A quick examination of the boots solved the puzzle. For reasons I never did quite fathom, the linings of the boots were treated with a green dye. Warmed and moistened by the patient’s none- too- fresh feet, the dye had migrated from the lining to the feet, and voila – green feet!

Pseudomonas can affect the fingers, too.
I advised the carers to keep an eye on the old boy’s foot hygiene, and to get him to wear socks under his boots. But it set me thinking about colours, and the importance they play in podiatry.

The colour green shows up in a couple of reasonably common conditions, both caused by the same organism. The critter in question is a variety of pseudomonas, a bacterium with a whip-like tail that likes living in warm, damp spaces. Once it has colonised a region, it produces green pigments. It affects the feet in two ways:

Both of these conditions are easy to treat. However, the best policy is prevention; keeping your feet clean and dry, paying attention to any damaged nails and attending to them before infection has a chance.